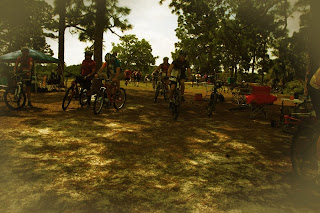 Our second race, the Treasure Coast AR, was held in Jonathan Dickinson State Park in Hobe Sound Florida.  In the interim between our first race in January and the Treasure Coast, Jeff and I focused on acquiring appropriate gear, such as good mountain bikes, a bike odometer, and map holders.  Overall we felt that we had a good base of the necessary gear.  In the limited time we had to train, we worked on mountain biking and a few days road rides of about 20 miles. We also worked (with the time we had) to improve our orienteering skills.  We, in fact, did improve, but it was orienteering that, nonetheless, proved our undoing in the Treasure Coast.

On Friday, we packed up the families and headed South. Saturday morning, Jeff and I were up early, ate a good breakfast and headed to the race location.  Remembering the effect that being late had on us last time, we arrived at 9:00am (our race started at 12:00pm), just in time to watch the elite teams start their race.  We  chose our location, set up our pop-up canopy, table and chairs and began to get our gear ready. Promptly at 10:00am we checked in and acquired our map, so we could go to work planning our race.  Reality set in the moment we were handed the map.

We were expecting an orienteering map with topographical features, clearly identified trails, and a detailed legend. Riiiiiiighhht.  The map for this race was a Google Earth shot of the race area with the control points identified on the map.  The scale of the map was huge, so identifying distances of say 50 meters, which can be necessary, was a challenge, because on this map that distance was measured in milimeters, and not many of them.  We essentially had a blurry satellite photo of the race area, and we were not prepared for this.  We weren't happy, but that was what we had, so we sat down and went to work planning out the race.  I'm sure others could have done it better, but I think we had a pretty good strategy.  We chose to start on the bike, and then do the canoe/foot/canoe section which would require us to end the race with a 1.5 mile canoe sprint (is there such a thing?) back to the finish. We hoped that the forecast thunderstorms and wind didn't hit when we were on the canoe.

Five teams chose to start on the bikes, and one coed team, which turned out to be 3rd place finishers Out of Steam Punks, took off at a very fast pace.  Jeff and I eventually caught them and settled in behind them for about  a mile. We had decided to pick up CP 14, which should have been on the West side of the road, on our to the way to the single-track mtb trails.  We peeled off from Out of Steam Punks who kept going, and we soon realized that finding the CP wasn't as easy as planned, so we got back on the road and headed to the single-track trails.  We were excited about the single track because much of our training had been on trails of this type in DeLand. We soon learned that these trails were not the hard pack, curvy and very technical trails we were used to.  These trails were full of rolling slopes. Slow gradual climbs of leg burning, will sucking, sugar sand.  Combine the sandy hills with terrain that held few trees and 85 degree temperatures and your left with a brutal 30 minutes of riding. We did our best to hang with Out of Steam Punks (OSP), picked up the three easily found CPs and headed back to the road. On the way back, we noticed that OSP was stopped on the road, and we saw that CP 14 was easily spotted from our position.  Jeff ran to the CP and we were back on the road to CP15.  We spotted the area with CP 15 about the same time OSP did,  and punched the card shortly after them.  We arrived back at the Main TA about 2 minutes behind OSP and well ahead of the other three teams on bike. We set a goal of 1 hour on the bikes and finished in 57 minutes.  We were quite pleased.

Unfortunately, I made it halfway to the canoe when I realized my power gels, which I would definitely need now and later, were still in my bike bag, so I ran back to get them.  I made it halfway back to the canoe when Jeff yelled that he left the map on the bike. No map, no race, so I ran back to the bikes to get the map.  I finally made it to the canoe and we were off into the mangroves.  We had a horrible transition and lost at least three minutes.  At this point, my heart was pounding, my head was spinning, and I had lost my sense of direction.  I had convinced myself we needed to go to our left (because we needed to go West and left is West, if you are facing North that is), but Jeff and a guy fishing on the shore stated everybody else went right.  I finally forced Jeff to show me North on the compass, and in fact we did need to head to our right, which was West, because we were, of course, facing South.

We realized very quickly that the rain we had feared would be very welcome. The sun was bright and hot and we had already been moving at a rather intense pace for over an hour.  The rain never came and the sun grew more brutal as the race wore on.

We did an ok job of making our way through the mangroves and finding the well hidden control points. About  half way to the foot section, which was about 1.5 miles from the Main TA we realized that OSP had left us far behind and we saw the first of the teams that started on the canoe/foot section headed back to the Main TA. At that point, I knew we were way off of their pace. We had at least an hour and a half left, and they had a little more than hour. That team, Epic Awesomeness, won the race.

We arrived at the Foot TA with an 1 hour and 15 minutes left. We were happy. At this point, we had acquired every point and were on schedule to finish at right around 3 hours.  If things went well on foot, we could clear this course and finish in the top five.  If, of course, is perhaps one of the biggest words in the English language.

We set out at a relaxed pace of about 9.5 minutes per mile.  We found CP 6 quite easily, ran the next half a mile to CP 7 and picked it up.  We had one hour to go and only CPs 8,9, 10, and, of course. a 25 minute paddle back to the finish.  Were we actually going to clear this course?  Feeling good we decided to try for CP 8, which  required teams to leave the trail and go about 300m into a clear cut area. I plotted a course of 341 degrees from a curve in trail.  We set out and quickly realized we had no way of knowing how far we had gone.  This became the horrifying theme of the next 30 minutes.  After about five minutes, I told Jeff, "5 more minutes and we have to give up."  Frustrated we did just that and returned to the trail.  We needed to run about 500 meters West to a trail, which headed back North, and on that trail we would find CPs 9 and 10.  After 5 minutes Jeff noted that we had run for quite some time and had not seen a trail.  We found one on the left of the road, but I noted the trail we wanted should be to our North or the right side of the road, so we kept running.

After a 1/2 mile or so the road/trail we were on intersected with one that headed North.  This was the trail we were looking for. Oddly enough, this one had campsites with RVs in them that were not on the map.  How odd, we thought.  We needed to go about a 1/4 mile up this trail to find CP9 which should have been 50m off the trail. We soon figured out that in our tired and frustrated state we really couldn't determine how far we travelled up this trail and to add stress we now had 40 minutes to find the two points and get back to the finish (this, of course, included a 25 minute paddle).  We began to curse this horrible map. How could a reasonable person find anything in these god forsaken woods without land marks to work with?   We gave up on CP9 and headed toward CP 10, which should have been on the West side of the road at a fallen pine near the intersection with the trail that would take us back to the canoe.  We couldn't find any sign of a fallen tree and I stated, "Jeff I really don't know where we are."  We knew were heading North and the river was North, so exhausted and frustrated, we gave up and headed to the canoe, hoping we could find it.  We had 30 minutes to get back.  After several minutes of walking and me cursing, we saw the volunteer at the trail intersection, and I thought, "how odd" the trail he is on should be 200 yards to our West, not there.  I shrugged my shoulders and we hopped in the canoe and headed back with 20 minutes left. In the span of 40 minutes we had gone from confident and excited to defeated. Not a good feeling.

As we paddled away from the TA we knew we would incur a time penalty because we would be at minimum five minutes over the deadline. The question was whether or not we could get there before we incurred a 2 point penalty for being 10 minutes over. The good news is during that paddle we actually started to improve and were able toward the end to hold a straight line.  We arrived at the finish 5 minutes late. As we sat and talked with our families about the race, we realized there were four teams behind us.  Despite missing three CPs we still finished 7th out of 11 teams.  Not horrible.  We talked to Out of Steam Punks (really nice people) and after listening to their experience on foot, we couldn't figure out what happened on the foot section. We were stumped.  What did people know about orienteering that we clearly did not know? We talked about it for most of the three hour drive home.

The next morning I got out the race map and compared it to a Google Earth view on my computer.  I started thinking about that volunteer standing right in front me on a trail that should have been 200 meters to my West.  Boing! We took the wrong trail!  The trail we needed to take was not easy to spot and in our exhaustion and stress we ran right passed it.  In the end, we went about 3/4 of a mile out of our way. That one little mistake cost us three points and two places in the finishing order.  If we had gotten 9 and 10 without a penalty we would have finished 5th, our goal.

So we return to the drawing board, and start to prepare for the SCAR AR in June.   I have acquired the Elite Race map and control point location information (thanks to the Canyoneros Blog!) from the  2011 Turkey Burn AR at DeLeon Springs about 10 miles from DeLand.  We will use these resources to train for the next race.

We won't finish in the Top 5 in the SCAR, but we will train and compete like we are trying to win.  Otherwise, why do it?