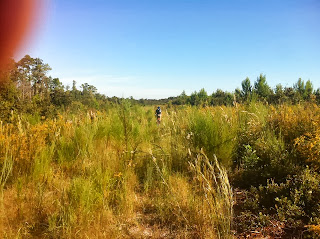 Our 4th sport race of 2013 was the Superhero AR at Blue Springs State Park in DeLand, Florida.  Given the location of the race in our hometown, Jeff and I were very excited about the opportunity to compete in an area we would have the opportunity to train in prior to the race.

We visited the park several times in the month leading up to the race using the bike trails, canoeing on the St. Johns, and exploring the Pine Island foot trail.  As we thought about the race, we assumed the Main TA would be in the main parking lot close to the canoe launch, that they would have us ride from there over to the single-track bike trails and back for the bike section, and use the Pine Island Trail for the trek section.

On race day, we set up and waited with anticipation for the map.   Would our predictions about the course be accurate, or would they throw some horrible surprise at us? We collected the maps at 10:00am and quickly realized we were correct.  The canoe section would be in the area of the St. Johns just south of the canoe launch (which we knew very well),  the trek would use the Pine Island Trail area, and the bike would require us to ride out of the park to the single track trails, collect the CPs and return to the Main TA.  But what the hell was a "foot/tube section?"  We didn't expect them to have us get on inner-tubes and float down the spring run. We decided that because it would our last section it would be quite a nice and relaxing way to end the race...riiighht.

We began at 12:01 on the foot section in a pouring down rain.   As soon as we hit the Pine Island Trail we took what looked like the first trail and realized that wasn't the one we were looking for. One minute into a race we had committed to not making any mistake in, we had made a mistake.  We quickly righted ourselves, however, and found the always pleasing first CP.  The next one (CP 8) required us to run about a half a mile to two picnic tables, and we knew this exact location.  We set a comfortable, but decent pace and arrived at the tables to find three Elite teams on bikes looking for the same CP.  At this point, the rain was coming down very hard. The CP was located 100m from the tables at 252 degrees, Magnetic North.  Instead of plotting the bearing, we went in where another team came out. This is always a mistake. We separated as we looked for the familiar orange and white square.  It was raining so hard I could hear nothing but the rain. I yelled out for Jeff, but I could barely hear myself, so I'm not sure how he could have heard me.  I found Jeff another 50m deeper in the woods and convinced him we needed to return to the tables to find the proper bearing and try again. On the way back to the trail, Jeff spotted the CP about 25m to our West, and we happily returned to the trail.  We headed to CP 9, and after some minor difficulty punched the card and moved on to quickly find CP 10. We were ahead of schedule, and on our way to clearing the trek section.  We quickly found the location of 11, only to find two other trek teams and a bike team trying to figure out what was going on.  This was clearly the  location of the CP based on the map, but the number was wrong. After about 5 minutes and much frustration, we decided to the punch the card and returned to the Main TA.  We had cleared the trek section in 50 minutes, although we were unsure if we had actually punched CP 11.  The volunteers were understandably not able to tell us whether or not that was actually CP 11.   I convinced myself we actually missed the CP and spent the next several minutes cursing out loud.

We set out on the canoe section (with me complaining about missing that CP) and quickly proceeded to collect all three CPS in 27 minutes.   We were a bit disappointed in the small number of canoe CPs, because we had been working hard on our paddling.  We were, however, happy with our time, as we assumed most of our competitors wouldn't come in much faster than that.

We set off on the bikes and quickly collected CP 15, which was also the troublesome CP 11 from the Trek section.  We made our way out of the  park and down the dirt road to the single track trails.  On the way there we encountered two teams making the slog back up the hill from the trails; we knew that would be us in less than hour.  We moved onto the single track trails which were familiar to us because of training there.  I realized very quickly that my legs were weak.  Jeff asked if I had taken a GU, and I said that I would get one at the first CP.  A few minutes later, I was sinking pretty fast. When we arrived at the CP, Jeff forced to me consume a GU. I have no idea why I didn't want to take one, but it seemed, in my state, that it would take too long.  Thank god, at least one of us had good sense, because after that we made our way through single tracks, easily collected all the points and headed back to the park. When we hit the hill back to the park, I bottomed out again. I said "f%&k it, I'm walking," but after about 30 seconds,  I climbed back on the bike and powered up the hill. We made it to the downhill back into the Main TA and actually had a little race between ourselves and powered back in.  We felt great with only the "easy and relaxing" foot/tube section left.

I was quite tired and suggested we start the section by walking a few hundred yards so I could catch my breath.  We knew we had less than an hour to complete the section, so we decided to get the two "foot CPs" (1 and 2) first and finish in the cool spring water. We settled into a comfortable jog and headed out  to collect 1 and 2.  I was pretty tired at this point, but Jeff powered us on, and we collected the two foot points and headed for the inner-tubes. As we jogged with our bright pink tubes to the spring, I told Jeff I was done, and he said "200 meters more, and you will be floating in nice cool water." I have no idea why we thought this was going to be easy. As soon as Jeff hit the water, I realized this was going to be hard. We had to head upstream to get two CPs.  There would be no easy float downstream. The only way to do this was to lie across the top of the tube and power forward with your arms.  Jeff made an epic effort to move up into the boil to get farthest CP.  I took advantage of the 100m separation rule and lagged back. When Jeff got back, he was spent.  He had powered up stream and used everything he had.  I tried to actually pull him with him hanging onto my foot, but that proved to be too much.  After much effort and quite a bit of loud groaning on my part, we collected the other CPs and crawled out of the water cursing the "relaxing" tube section.

We turned in the tubes with 8 minutes left.  As we ran at a pretty quick pace, Jeff said "this is our 43 seconds."  I asked him what he was talking about and he said "we finished the SCAR 43 seconds out of 3rd place and we need to dig in hard now to make sure that doesn't happen again." So we ran hard to the Main TA. We turned in our card 7 seconds ahead of "Beer Run Brothers." Lesson? Listed to your teammate.

Although our 2:55 time was well behind the top four teams, as it turns out, we had punched CP 11 and therefore cleared a course for the first time and finished a very respectable 5th place in a fairly competitive race.  We left exhausted, but satisfied.   Thanks to Greg and Pangea Adventure Racing for another great race.